Technologies exist to make human tasks more convenient. The Samsung SUR40, for example, enables several people to simultaneously share content on its 360o interface using Microsoft PixelSense that allows camera-free touch and object recognition on the screen. Recently, a new application for this device was developed as a means to bring together conflicting ideas in a neutral environment. This tabletop application called “ideaSpace” was spearheaded by Fernando Loizides, Ph.D., a special scientist (visiting lecturer) at the Cyprus Interaction Laboratory, Department of Multimedia and Graphic Arts of the Cyprus University of Technology. 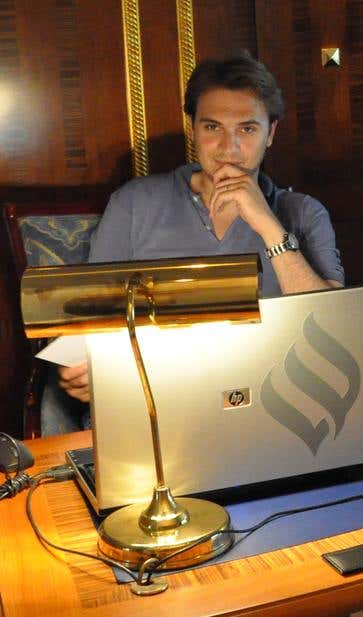 Freelancer® recently talked to Fernando about this collaborative application and how the online jobs platform played a crucial role in its development.

ideaSpace is an interesting concept. It demonstrates how computer technology aids human interaction. Please tell us more about it.

ideaSpace is a bespoke application, custom built to work on the Samsung SUR40, that aims to allow users to be creative collaboratively by prototyping interfaces, posters, ideas, and generally anything that can be digitally or physically presented. The users, by means of ideaSpace, can engage in conversation by visually working towards a common goal.

Its main function is to create projects, each with the purpose of creating designs with a unique concept. Each project holds the digital images of brainstorming ideas that consist of user-scanned designs through the SUR40’s scanning facility or are sourced from an external device. Once these designs are loaded, the users discuss and annotate the ideas using keyboard text,  voice recording, or “finger paint annotations” that can then be uploaded to and shared on Facebook.

How does collaboration take place in ideaSpace?

We hypothesize that it’s easier to bring people together and to understand each other, setting aside differences when they’re given a common problem to focus on and solve. For example, the sensitive issue of peace among nations which is piloted now. The primary study focuses on bringing together groups from two conflicting parties. One is Cyprus with a division between the Turkish Cypriots and the Greek Cypriot community due to a war in 1974. Children and young adults are asked to collaborate in finding ideas and images that will encourage unity and peace between the two nationalities. They’re asked to meet, four at a time (two users from each nationality) in the same room around the tabletop application and work together using ideaSpace to produce these prototypes of designs/posters and thoughts. Other representatives are also asked to participate online via Facebook, where the readings and images are uploaded for a broader discussion by the community.

Why did you choose to outsource its development, and specifically to Freelancer.com?

The choice to outsource came later, after we were unable to find the expertise required or the price quoted was higher than we were able to accommodate. For this reason, it was decided to outsource the project (a first in the lab’s history) and search for individuals who could satisfy our criteria. I was familiar with online options for hiring skilled persons and specifically remembered that a friend had used ScriptLance (which Freelancer® acquired). I read reviews online and asked other friends who had used Freelancer® for their recommendation; that encouraged me to post the project and see what programmers would respond. Based on the huge response and the information about the programmer I could gather, the decision was made to assign the project through Freelancer®.

This is a challenging project for any freelancer, given that the technology is so specific and with limited support, if any, online. How were you able to manage such a project?

Only one programmer was hired with experience in touch technology (such as mobile and tablet programming) and in C# and software development kit (SDK) for Windows for touch devices.  I managed the development and programmed a semi-working prototype to guide the developer.

Most important was someone with the experience to take on the project with very little help from outside sources. Usually developers, when using a new technology/API rely on forums and manuals to guide them through new code and errors or when they are stuck. Due to the lack of forums and developers working on the interactive tabletop field and specifically using our required APIs, it was difficult for the developer to find help on the issues that he/she would face. For that reason, we required good previous experience and a portfolio demonstrating related previous work by the developer.

A remote collaborative project is quite difficult. What challenges did you encounter? How were these resolved?

The most distinct were unique to the project: the developer was in a remote location and using equipment that was not available locally to him. The other major difficulty was the time difference. Our developer had a 6-hour difference which meant overtime from both of our sides in order to collaborate in meetings and testing sessions.

If you were to describe your Freelancer.com experience in three words, what would these be? Why?

Fluent. The process of posting a project and carrying through till the end is fluid and easy, like an installation wizard.

Intuitive.  Things just make sense…the buttons, menus and descriptions for things are easy to understand and use.

Enabling. Things that could not have otherwise been done, skill sets and tight deadlines that need a freelancer immediately can be easily found and utilized.

As an entrepreneur, there’s a lot of things you need to keep in mind to have a successful business, including legal issues, Here are tips for you.

Cheers to the supermoms on Freelancer!

Camille Reed, an employee turned entrepreneur, hired a freelancer to build her a website and hopefully bring her business to the MVP level.

A Vision, a Promise, a Future