We need the best\cutest\funnest Chibi character art for a children's cartoon based on mythological characters in modern day. 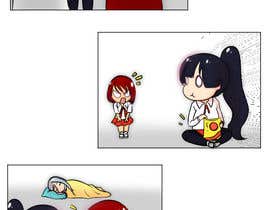 We require great art for the cartoon and characters detailed below. Additional research into their mythologies could only help:

When The Devil decided that it was time to bring about the destined apocalypse upon the earth, he took a sample of every man-made evil of the world and created four evil souls. He commanded his loyal servant to chisel powerful steeds worthy of these powerful spirits out of bark from the Tree of Eden. When the loyal servant couldn’t find the Tree of Eden, he made four colorful ponies out of construction paper. Thus, much to the chagrin of The Devil, The Apocalypse Girls were born. Now, the four evil sisters will spread chaos and discord throughout the world one elementary school at a time.

The Apocalypse Girls is a comedic animated series about the everyday lives of our titular characters. Our heroines attend school like "normal" children while attempting to bring chaos to the world though wacky schemes such as stealing all the chocolate milk or capturing Santa Claus. The Apocalypse Girls are based on their namesakes of Pestilence, War, Famine, and Death. Their colors, styles, personalities, and names are a mixture of the lore of the Four Horsemen and different dark figures from Greek mythology.

Kate is the Apocalypse Girl of Famine. Her name comes from Hecate, "She that operates from afar". In Greek mythology, Hecate was a goddess associated with witchcraft, crossroads, tombs, demons, and the underworld. She has black hair and eyes because the Horseman, Famine, rode on the black horse.

Kate can eat a lot and is good at economics and politics. She loves to win people's valuables or convince them to part with them even if it’s only a nice pencil or scrunchy. She is good at bartering and is very convincing, but she is easily manipulated by food and puts on weight quickly. She considers herself the leader of the group.

Erica is the Apocalypse Girl of War. Her name comes from Eris, the Greek goddess of strife that caused the Trojan War. She has red hair and eyes because the Horseman, War, rode on the red horse.

Erica can command animals, but the animals often turn on her. Erica loves combat sports like MMA and Football. She likes play sports and almost always accepts challenges even though she often loses.

Melanie is the Apocalypse Girl of Pestilence. Her name comes from Melinoe, the Greek Goddess of haunting spirits and phantoms who sent her spirits to men in order to cause fear and terror. She has white hair and eyes because the Horseman, Pestilence, rode on the white horse.

Melanie is the smart one of the group, and she has the ability to places curses. However, she is incredibly shy, and she does not like to bathe, brush her teeth, comb her hair, or otherwise take care of her hygiene. The others have to force her to do those things. She likes to curse people that bully her (or try to get her to bathe).

Tina is the Apocalypse Girl of Death. Her name comes from Libitina, the Roman goddess of funerals, corpses and death. Her hair and accessories are a combination of grey and green because the Horseman, Death, rode on the pale green horse.

Tina is the youngest, but strongest, of the sisters. She is mute and only communicates through gestures, grunts, and terrible drawings. Tina is lazy and sleeps a lot, but she will take on a monstrous, Cthulhu-like form when she is angered. She has a pocket dimension inside of her mouth in which she can absorb anything and spit it out later. People love to dote on her because she is small, cute, and passive. She often doesn’t pay much attention to what’s going on around her.

The images are basic examples of the chibi style I want. The pictures should match their personalities and mythology. Their designs have to assume that they can logically fit in at school. The picture of Raven from Teen Titans Go! is given as an example of Tina in her angry form. I require pictures of each girl and another picture of Cthulhu Tina.

“Diego worked fast and updated files regularly. I hope we can work together, again.”