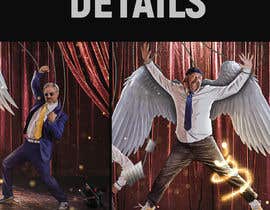 Hey everyone. Time for another contest! I've really had fun with these in the past, and have some new pictures for you to play around with.

I threw a lot of different pics in here, and don't have any particular direction other than to say, make it funny or clever or interesting, or ideally, all of those things. The "EXAMPLES-ONLY" file shows a bunch of things that were done on previous contests here. I don't want to see those same exact kinds of things again, but you should be able to tell from those examples the type of things that I'm looking for. I'll be looking for composition and content (be original!), and also for how seamless the image looks as far as whatever background or effects you've added to our images.

UPDATE: I’m sorry that I wasn’t clear that I’m not expecting anyone to do something for ALL of these pictures. The various images are just there to give you more things to play around with. So just come up with one idea and submit it as an entry. Or more than one, if you want. But I’m only looking for one entry to be the winner, and that might involve any of the images or combination of the images.

We are a band that plays music for kids and families, so keep that in mind as far as appropriate content. That being said, we are very rock 'n' roll/irreverent, and geared a bit more toward an older range of kids (like 5-10), so I definitely don't want something that's more babyish or meant for toddlers. Also, I DON'T want the band name anywhere, or any other specific references to our songs or things like that. And NO LICENSED CONTENT!! If you include anything from Disney, DC, Marvel, Star Wars, Harry Potter, etc., I can't use it.

Where there are pictures of all three of us together, you can assume that I like that whole shot, but otherwise, I cut out individual pieces of the three of us (Ben, Dave, Eric), which you could piece together. You could also do an individual image with just me (Eric), if you have a fun idea for one of the pics of me. But I wouldn't want individual images of just Ben or Dave (sorry, Ben and Dave!). When you cut us out and edit, also please do what you can as far as the picture tone/quality.

I will probably do another contest after this one that's more focused on doing something with one or two of these specific pictures, but I wanted to keep this one more open-ended. Other than the winner, I might also offer something (like $20) to a few other entries that I really like and might be able to use for some promo. And there have been several times where I hired people from these contests (whether they won the contest or not) to do more specific work later, so that's always a possibility.

I'd like the final file(s) to be high-quality JPEG or PNG, and would appreciate also receiving the PSD file, in case I need to make small adjustments later.

The contest will run the full length, and I will try to rate and comment on every entry. Any questions, please ask. Have fun!