Cartoon Illustrations for a book about Twerking 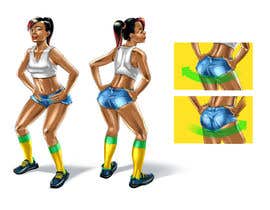 I need an ebook front cover for "Twerk Crazy: The Unofficial Guide to Twerking Better Than Hannah Montana" by author Ashir Nelson
AND cartoon illustrations showing how to twerking from the following steps:

Step One:
stand with your feet a little wider than shoulder width apart, and put your hands on your hips. Bend your knees until you're in a comfortable squat, and actually let your knees flex out over your feet. Your feet should be pointed out slightly, with your heels pointed back toward each other so that if you drew lines on the floor they would make a V. This will make your butt clench. Rock your hips forward. Press on the back of your hip bones with your thumbs; this will make you push your hips forward, and allow you to feel the movement as you do it. To push the hips back, which is the big part of the twerk, pull back on your hip bones with your fingers. This will reverse your pelvic thrust and make your hips shoot backward.

Get back in the position you were holding before, but instead of putting your hands on your hips put them just over your knees with your wrists turned outward. This will make you cock out your elbows. You should also arch your back, making this pose very familiar for weight lifters who've ever done a barbell squat.

Using the motion you figured out in step one to thrust your hips down and then back to their original position. Don't bend or unbend your knees, and just move your hips. It's helpful to breathe out on forward thrusts and to breathe in on reverse ones as the belly expands and contracts when you're just getting started. Given how fast twerking is supposed to be done though this kind of breathing can very quickly result in you panting while you're dancing. Get comfortable with the movement at both slow and fast speeds, and really get a feel for how your rear end bounces. That's sort of the whole point of the movement, after all.

Once you've mastered the simple movement of the twerk the next step is to bounce. Twerking is meant to be done at a fast pace, and it looks more like a continuous motion than it does a series of stops and starts. Don't think of twerking as one thrust at a time. Rather think of it like juggling; up and down, you have to keep your butt bouncing along to the rhythm of the music.


For the advanced twerker who really wants to catch the audience's attention on the dance floor there's the hands-free twerk. It's no more difficult than the regular twerk, but it does require a lot of balance, muscle control, and you need to be able to do something with your hands so they aren't just sitting by your sides. On the other hand, if you can pull this move off it's one that will definitely get you noticed even if it makes you sweat.

Drop down into your squat, and arch your back. Instead of putting your hands over your knees though, put them somewhere else. Hold them over your head, or hold them out in front of you with one hand grasping the other. You can move your hands to the music, run them through your hair, or whatever you want to do with them as long as they enhance the movement and don't make you look awkward.

With your back arched and your hands out of the way, start twerking. It's going to be harder without your hands to lean on, and it's going to put a strain on your core muscles. With the movement in the pelvis it's important to take a wide but comfortable stance, and to make sure you don't lose your balance. It's easier said than done, and it will take a lot of practice, but twerking takes hours of training before the body can just drop into muscle memory without the brain even thinking about it. It's like playing the flute, or sword fighting.

Please ask if you have any questions. You can simplify the steps as much as possible as long as you still get the point across.

Thanks and good luck!