ILLUSTRATION OF A CHARACTER IN CARTOON, COMIC, MANGA STYLE OR DRAWING 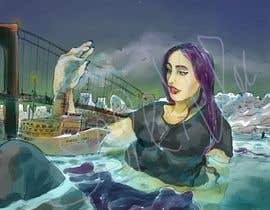 AFTER THE CONTEST
We are counting on you! Although the contest has now closed, in the coming weeks we will select more entries than have already been submitted, as we cannot take all of them at the same time. Thank you for your patience, and for the quality of your entries.

I need an illustration of a character. The style of this illustration is free: it can be comic, classic drawing, cartoon or manga, as you like.

CHARACTER CHARACTERISTICS
The character is a giant girl named Mary.
You can see how she is in the image "Mary"

THIS CHARACTER IS A GIANTESS. IT´S VERY IMPORTANT TO REPRESENT HER AS SUCH, with an object of normal size (smaller) next to her. In the illustration she must be seen as a giant-sized person.

The CHARACTER´S CLOTHING has to be the one that appears in the image "Mary"
THE CHARACTER´S FACE: the face and hair in the drawing must be the same as those of the character, as it appears in the image "Mary"
STYLE: You can choose the style you want: if you want to represent her as a manga character, with the big eyes, you can. Or if you prefer, like a comic book character. Or a cartoon. That is up to you.

CHARACTER POSES
You can represent the character in any position you want, as long as it´s clear that she´s a giantess and not a normal-sized person.

DESTINATION
The final destination of the illustration, therefore, is to be published on the internet. It´s not for printing, but so that it can be seen on the screen of a PC or a smartphone.
In addition to the winner, it´s possible that some of the best drawings will be selected to be published on the same website, but that would be decided once the contest closed.
You can make the illustration how you want: in black and white, or in color, but the better and more complete it´s, the more possibilities there are to win the contest.
If you need any clarification, ask what you want.
Have fun!

“I´m very pleased with her work, she´s a great artist!”